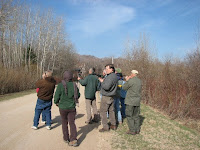 If we had some more warblers and shorebirds it would have been a really big list, but hopefully that will come later!

Closer to home, at Lake Bluff we've seen a rose breasted grossbeak and towhee. The male goldfinches are all wearing their bright 'courting yellow' and a woman in Freesoil reports hearing an oriole. Now if it would just stop snowing... 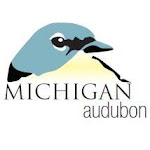 Connecting Birds and People for the Benefit of Both

From Manistee travel north on US-31 to M-110. Turn left onto M-110 and continue north for about 1 mile. The Center is located on the left (west) side of the road at 2890 Lakeshore Road.